Haiku Poetry: Haiku of the Week

Websters Dictionary defines a Haiku poem as "A Japanese lyric poem of a fixed 17- syllables form that often simply point to a thing or pairing of things in nature that has moved the poet."

Haiku originally came from a combination of ancient Japanese words meaning Hai -- amusement, and ku -- meaning verse. In its earliest form it was termed haikai and was meant as a rebellion against the traditional classical form of Japanese poetry called the waka.

Waka poetry thrived from 761 AD until the early part of the 16th century, and traditionally was composed of 5 lines 31 syllables (5-7-5-7-7). Classic waka poetry was highly influenced by Buddhist thought incorporating ideas of the passing of time, the ebb and flow of life, and the idea of impermanence. Waka poets were also keenly aware of the natural world, and many of their poems depict scenes from nature.

As the waka style of poetry begin to decline, become codified, and lose its vitality a new form of poetry came into being--- the Haiku. Originally created as a commoners poetic expression it was meant to deviate from the traditional, ordinary, confined spirit of the waka poetic style.

Haiku poetry immediately became popular and in the 17the Century Haiku reached its Full potential with the poems of the great Japanese Zen master Basho. Basho wrote of many subjects, but perhaps is best known for his poems on nature. As Basho set his vision on the natural world, he captured within the space of a few short syllables the universal pulse of nature, and the human perceptions of space and time. Basho was a prolific composer creating poems that were light and playful, but also poems that were deeply symbolic.

Haiku continued to flourish until long after Basho's death and does so today with thousand of haiku poems being published in Japan and worldwide. Some of the best of the modern Haiku poems are published by poets from the English language.

Great Haiku poetry has the ability to evoke powerful emotions and images within the space of a few short lines. Often within the best Haiku poems there exists, depths within depths, meanings within meanings. Great Haiku poetry with the power of a few poignant words can suggest and point to the amazing joys and sadness of life, to the inherent humor in the human experience, and to the mystery of humanities place within the great circle of existence.

The greatest of the early Haiku poets was Basho, born in 1644. Wondering monk, Zen teacher and famous poet, Basho was a prolific writer composing hundreds of Haiku poems many of defining the style and providing an inspiration for many generations of Haiku poets who came after.

Ancient Pond
Frog jumps in
the sound of water - Plop

Perhaps the most famous Haiku of all time the poem was composed by Basho in 1686. History tells us that the last two lines were written first. Basho was sitting in the garden of his house in Edo with some of his Zen students, when suddenly a sound was heard during a pause in the conversation.

Basho said the lines, -- "Frog jumps in, The sound of water." This was immediately recognized as a possible ending for a Haiku. After the others had made various suggestions, Basho completed the poem with the line, "Ancient pond". Everyone agreed that this was the perfect completion of the Haiku.

Octopus traps: how soon
they are to have an end --- these dreams
beneath the summer moon

At first glance this poem is a simple description of fishermen setting their traps and the Poet’s knowledge that fall and winter is approaching. As with the best Haiku poems, however, as one dwells on the poetry and the wording, it becomes apparent that perhaps Basho was not just speaking of normal daily activities, but was pointing towards the unreal, dreamlike quality of our life activities and how quickly it will pass.

Not even a hat --
and cold rain falling on me?
Tut-Tut, Think of That!
-Basho

Basho could be deeply philosophical but could also be light and playful as shown in this simple Haiku. Great Haiku poems are designed to create strong emotions and within a few short lines evoke a similar experience in the reader to what the poet was experiencing.

As Haiku poetry matured, it became a tradition to compose death poems upon as a way of honoring family members, or famous people when they passed away.

The following poem was composed for the great memorial gathering on the thirteenth Anniversary of the death of the great Haiku poet, Basho in 1707. It is considered a death poem. Haiku death poems are often intense and powerful, but rarely morbid. They speak with a Zen awareness of the impermanence of life and the passing of all things.

Wandering dreams alas,
over fields all burned, the wail
of winds that pass.
-Onitsura

So as not to end on sad a note, Onitsura's first poem composed when he was 8 is included here.

Although I say,
"Come here! Come here! The fireflies
Always flying away!
-Onitsura 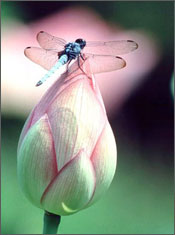